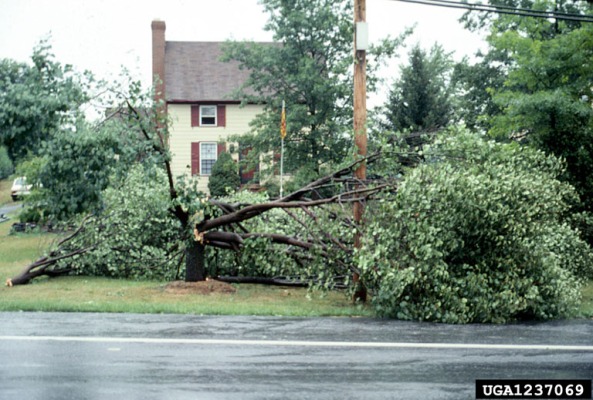 At this time of the year we begin to think a lot about what to plant in our gardens in the approaching weeks. Below is a strong suggestion of what NOT to consider.

The Callery Pear enjoyed many years of popularity in the United States before its down-sides were revealed. Today we discourage its use everywhere in this country in spite of varieties that are touted to be insect and disease free, breakage resistant, and fast growing and beautiful (the latter is true).

This tree was imported from China and Vietnam around 1909 to the Arnold Arboretum in Massachusetts and in 1916 enthusiasts developed a variety that was fire-blight resistant. It was thought of as very hardy, very beautiful and ornamental, but the negatives were not recognized until much later. The Callery pear now occurs throughout the Eastern United States, West to Illinois and South to Texas.

The Callery pear is beautiful indeed, but it is extremely brittle (one of the results of very fast growth) and it breaks easily with wind, ice, and snow loads. It is also a very prolific seed bearer and the seeds are dispersed widely by birds and mammals. These seeds have an amazing germination rate, and dense, large thickets of Callery pear are quick to form, out-competing native plants.

The abundant white, five-petal flowers can be almost an inch in diameter, blooming in the spring before the leaves expand. The resulting round fruit, about .37” in diameter, is hard, but becomes soft and tasty with the first frost. The flowers, beautiful as they are, frequently have a disagreeable odor, similar to rotting fish or chlorine.

The summer foliage is deciduous, smooth, dark green, up to 3” long, leathery and glossy, and occur alternately on the stem,. The fall color is bright yellow, orange, red, pink purple and bronze. It is no wonder that the Bradford Callery pear achieved such popularity.

Descriptions and details about these suggested trees can easily be found on the internet and nursery catalogues.

For information on invasive plants in our region, go to Plant Invaders of the Mid Atlantic Natural Areas.

The Ewing Environmental Commission welcomes suggestions for the Tree of the Month from all Ewing residents.