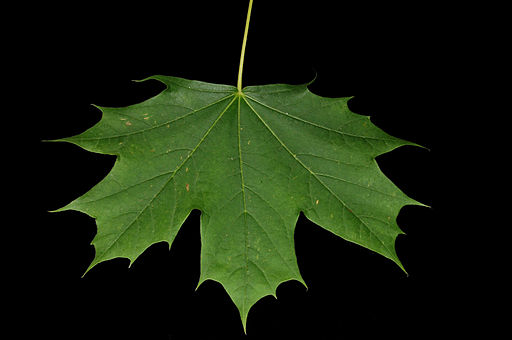 No! Don’t plant this!

This maple tree is seen almost everywhere in the United States north of Hardiness Zone 7 and west to Minnesota. Native to Europe, it has thrived in the U.S.A. since it was introduced in the 18th century to Philadelphia by John Bartram, an early American botanist and horticulturist.

Acer platanoides adapts to extremes in soil (acid or alkaline, clay, sand), compaction, hot and dry weather, air pollution, and either full sun to part shade. As a result, its toughness has contributed to over-use as a street tree (especially after the Elm tree die-out), lawn specimen, and park tree. It has become invasive, crowding out native plants in our woodlands and forests because of its heavy seed crop and high germination rate, and site adaptability. Pests and diseases (Powdery mildew, Verticillium wilt, Anthracnose, Leaf scorch,) have not diminished its spread but the recent arrival of the Asian long-horned beetle may change that for the Norway maple as well as for all the native maples.

Why has the Norway maple fallen out of favor?

This Maple is easily confused with our native Sugar Maple, Acer saccharum. They both have opposite, simple, 3 to 5 lobed, dark green, pointed leaves, but the Norway maple leaves are slightly larger, 4 to 7” across as opposed to the 3 to 6” Sugar Maple leaves. The Norway maple has a milky sap which can be extracted from its petioles (the leaf stalk) whereas the Sugar Maple sap is clear. The seeds in both species, samaras, are flattened, two-winged, and differ considerably as can be seen in the photographs.

Norway maple will occasionally reach 90’ in height although 40-50’ high is the average, with a spread 2/3 or equal to the height. It casts very deep shade. The fall foliage is usually yellow and the tree holds its leaves longer than other maples do. The wood is yellowish-white to pale red, and has been used for furniture making although the wood is reportedly not durable.

There are dozens of varieties of Norway maple which include a range of growth habits and leaf color, such as that of ‘Crimson King’ and ‘Dissectum’, which will doubtless continue to make this tree popular. Work is ongoing to develop sterile varieties.

To learn more about invasive plants, go to nps.gov/plants/alien and www.maipic.org

The Ewing Environmental Commission welcomes suggestions for the Plant of the Month from all Ewing residents.