By John Phelan (Own work) [CC BY 3.0 (http://creativecommons.org/licenses/by/3.0)%5D, via Wikimedia Commons

The August Tree of the Month is an unusually beautiful and useful tree that affords all season interest.

Betula nigra, River Birch, is a fast-growing, medium sized tree which has become popular as a specimen tree or in groups for large residential properties, parks, golf courses, and other situations. Growing to 40’-70’ or more with a slightly smaller spread, this tree is hardy to USDA Zones 4-7, ranging from New Hampshire to southern Minnesota to northern Florida and west to Texas. Ewing is in USDA Zone 6b.

The tree’s habit, when young, is pyramidal, and it can be multi- or single trunked. At maturity the tree becomes rounded. 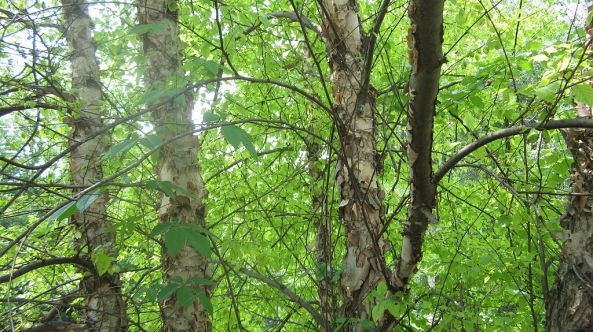 Close up of the beautiful exfoliating bark By Googoo85 (Own work) [CC BY-SA 3.0 (http://creativecommons.org/licenses/by-sa/3.0)%5D, via Wikimedia Commons

River Birch has many great assets. It has an exfoliating ( “peely”) bark, which ranges from peach to reddish-orange-brown to salmon-pink and reveals a creamy inner bark where it peels. This makes the tree unusually attractive, especially in the winter after its leaves have dropped.

This tree is low-maintenance, and is the most disease resistant of the Birch family. Unlike other birches which are suited to more northern habitats, River Birch is very tolerant of heat, standing water (it is also drought resistant), and most important, it resists the Bronze Birch Borer, which kills most other birch species in our area and warmer zones. It hosts few diseases or pests. Deer don’t favor it, which is another plus here.

The water tolerance of River Birch makes it very useful for planting along ponds, streams, flood plains and other low areas. It is used frequently to naturalize detention basins as it will tolerate standing water as well as dryness. It is a good tree for bioswales or rain gardens.

The leaves are leathery, lustrous, dark green, 1.5” to 3.5” long and up to 2.4” broad, and diamond shaped. They flutter in the wind, revealing a silvery colored underside. The leaf margins are doubly toothed; in the fall the yellow leaves drop quickly.

The blooms, which appear in April or May, are drooping, brown 3” catkins for the male flowers, and smaller, green, upright catkins for the female. The flowers are wind-pollinated and produce small nutlet-like fruit in the late spring.

River Birch requires a moist, fertile, acid soil with a pH of less than 6.5 and sun, although it will tolerate light shade. They are somewhat sensitive to fall planting and transplanting. Avoid pruning River Birch in the spring when its sap is running; save the chore for late summer and fall.

Native Americans used the boiled sap as a sweetener similar to maple syrup. The wood is too knotty and contorted to be useful commercially.

The Ewing Environmental Commission (eec@ewingnj.org) welcomes suggestions for the Tree of the Month from all Ewing residents.