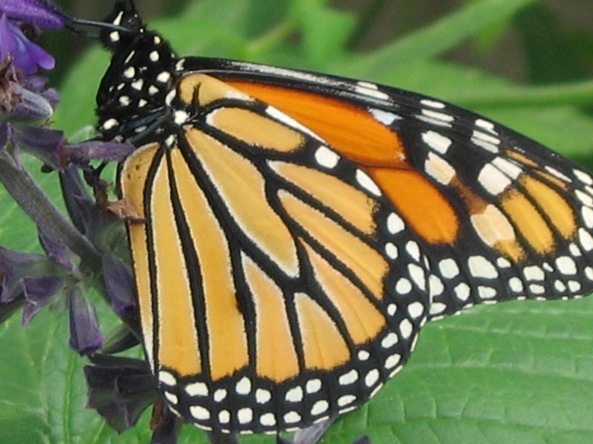 We are now mid-to-late season during the fall Monarch migration. Monarch butterflies are travelling about 50-100 miles a day as they migrate from the northeast down to Florida, the Gulf States and Mexico. While some of these Monarchs may end up in the central Mexico wintering grounds, most of our local Monarchs overwinter in Florida and along the Gulf Coast.

During colonial times, Monarchs were not mentioned in the largely forested northeast. The first observations of Monarchs here seem to be related to the deforestation of this area for farming. Indeed, migration on the East Coast differs from migration on the West Coast in several aspects, and seems to have arisen during Colonial times.

Western Monarchs, for example, enter diapause (stop breeding) during the fall migration when most migrate into Mexico, where they form massive aggregations of millions of butterflies. There are some overwintering sites in California, but those in Mexico seem to be the most important. These diapausing Monarchs become darker during their fall migration before acquiring the striking orange color during Spring migration. In contrast, eastern Monarchs do not breed during fall migration. Upon reaching their wintering grounds they will breed all winter long.

During migration Monarchs typically feed prior to their morning flight, and then fly nearly nonstop until 4-6 PM when they stop flying to search for food and overnight refuge.

Members of the Goldenrod family, and many fall Asters, are important nectar plants during fall migration. In the late afternoon, meadows overgrown with Goldenrod and Joe Pye weed are good places to look for these beautiful insects.

While Milkweed is a critical larval food source, the importance of this plant during fall migration is minimal since the Monarchs are not breeding and the plant has already flowered prior to the main migration. By contrast, Milkweeds are critical during Spring migration because the Monarchs need to replicate 3-4 cycles as they migrate to the Northeast.

Adult lifespan during the Spring is only a few weeks, while during Fall migration longevity is measured in months. Beyond expanding the range for Monarchs, migration is likely to be beneficial for them.

One of the most serious diseases of Monarchs is a protozoa parasite found in all Monarch populations and is transmitted from female to larva. High infection may result in shorter lifespans, decreased fitness and decreased fecundity. Infected butterflies are “culled” during migration resulting in a decrease of infection incidence. In the non-migratory southern populations (Florida, Gulf States) the disease incidence is as high as 70%, while eastern migratory populations have disease rates below 7%.

During your walks, you may notice Monarchs with beak bites on their wings. Rest assured that these butterflies are carrying atropine.

While butterflies are certainly not facing extinction, migration of the American population is a threatened phenomenon. Most significantly for our eastern butterflies is the loss of Milkweed stands to support and sustain the spring migration. Ewing has relatively few stands of Milkweed today, which is creating a food desert for these insects. Next Spring consider planting Milkweeds in your yards to help attract and sustain the lovely butterflies. If you’re lucky you might get to enjoy a most lovely caterpillar!