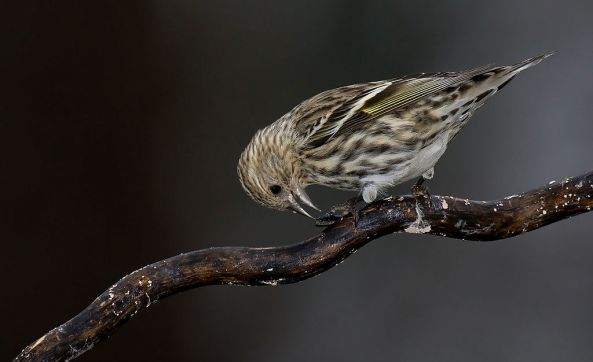 It was in early December last year, while doing my regular weekend bird feeder survey, that the advance scouts showed up.  Three of them were at our two thistle feeders, usually hogged by the Goldfinches.  When I looked at them I saw Goldfinch characteristics, but heavily streaked like a House Finch; I made a mental note to look up hybridization among the two species in Sibley’s Bird Life and Behavior, and went back to recording and counting the other birds.

Every winter for the past four years we’ve been members of a Cornell Ornithology Lab project called Feeder Watch (feederwatch.org).  A nationwide and Canada effort, it involves 15,000 members watching their bird feeders for two consecutive days each week, and reporting what they see.  You note not just species, but the maximum number of that species you see at any one time.  At our feeders, for example, we always have White-Throated Sparrows poking around under the sunflower feeder for what’s spilled, but the number you see depends on the time of day you’re watching.  There may be one or two most times, but if you’re watching at dusk, and have binoculars that gather lots of light (like my 7x50s), you could see six or seven.  That’s why I try to watch in the mornings, afternoons and at dusk on Saturday and Sunday, probably about two hours a weekend.

On a normal winter weekend we’ll report from 13 -15 species, more if the hawks (Coopers and Sharp-Shinned) are around, fewer if the temperature’s high, 20+ if there’s a snow storm and their other food sources are restricted.

The weekend I saw the scouts I forgot to check the Sibley, so I didn’t report them, but there were more next weekend!  Five was the most I saw at any one time, but they were there continuously, and very hungry.  The Goldfinches weren’t around so these birds had little competition at those feeders.

Over the years Ann has landscaped our backyards with trees and shrubs attractive to birds, and we’ve put feeders close to them.  A large Blue Holly shrub is between the safflower feeder (columnar in a squirrel-proof cage), and the sunflower hear feeder (two-sided, counter-weighted access bars, suspended from a cable, and beneath a Plexiglas witch’s hat… challenging for squirrels).  The Holly gives great cover when hawks are around, as do the Canadian Hemlocks, close by.  Winterberry Hollies offer food for seldom seen Bluebirds, among others.  Suet (berry and nut, two cakes at a time) are suspended from a cable with a large platter above them to discourage squirrels (it does), but in high winds, like now, the platter becomes a sail and the whole contraption ends up five or ten yards away; it’s exciting to see it fly off.   Finally, the two thistle feeders are on curved poles off the deck rail, one of them is a large pan of water, year-round.  It’s got a thermostat in it now to keep the water from freezing, and it always draws a crowd.

When I finally read the Sibley’s Bird Life and Behavior the next weekend, starting with Goldfinches, what leapt out at me was the phrase: “Goldfinches do not hybridize!”  Yikes, I thought, what does that mean,,, and then it dawned on me: this is a different species!  So I quickly pulled down Sibley’s Guide to Birds, and Peterson’s Field Guide, and discovered that these were Pine Siskins, a species I hadn’t seen since the early 50s in New Mexico! Wow!! Pine Siskins in New Jersey, with their sharp little bills, and touches of yellow among their brownish streaks; they looked just like they should.  I included them in my census for that weekend, modified my report for the previous week to include them too, and made a special comment to Feeder Watch asking if their appearance was at all unusual.

It was, they replied, for it turned out that we were in the beginning stages of an irruption (moving in irregular winter patterns) of Pine Siskins last winter, and they were heading east from western Pennsylvania.  (Feeder Watch website has a neat feature that lets you select a species, your region and the year, and it gives you an animated map of ow that species has moved through our region during that time.  Different sized circles and colors represent reporting stations and numbers.  Watching that display you could see the Pine Siskins’ invasion build from the west.

The few advance scouts of this nomadic species, which travels in flocks and is usually confined to the western states every other winter, turned into a veritable flood over the next three months.  Each successive weekend we reported higher and higher counts of them seen at any one time. with the peak at 55!  It was akin to O’Hare or LaGuardia on a Friday evening: the feeders could hold 30 or so birds, so the rest stacked up in the Dogwoods, Cherry and Oaks, waiting their turns.  New arrivals were first to the Oaks, then Cherry, then Dogwoods, and onto the feeders as other left. You could almost see their traffic controls assigning locations.  As the number grew, so did our reporting site on Feeder Watch‘s animated map, until it was a big green circle!

What caused this?  The Feeder Watch account of the Pine Siskin irruption 2008-2009 goes on to say: “Pine Siskins typically irrupt in the West every other winter, but the pattern is much less reliable in the east.  The large numbers of Siskins in the east this winter are most likely due to a shortage of their typical winter food supplies in the forests of Canada.”

It’s too early to tell if they’ll be back this year because the Feeder Watch season has only just started, but the food supply in Canada will be key.  The species total is about the same, but numbers seen are a bit down, perhaps because of the wet year.  Regular visitors include Titmice, House Finches and Goldfinches, Juncos, a White-Breasted Nuthatch, Carolina Wrens and White-Throated Sparrows.  The three Woodpecker species (Red-Bellied, Hairy and Downy) are covering the suet and an occasional Cooper’s Hawk cruises by looking for a fast lunch (and got a Mourning Dove the other day).  If the Pine Siskins do return, we’re ready for them, as we just got a new twenty pound sack of Thistle Seed, their favorite!